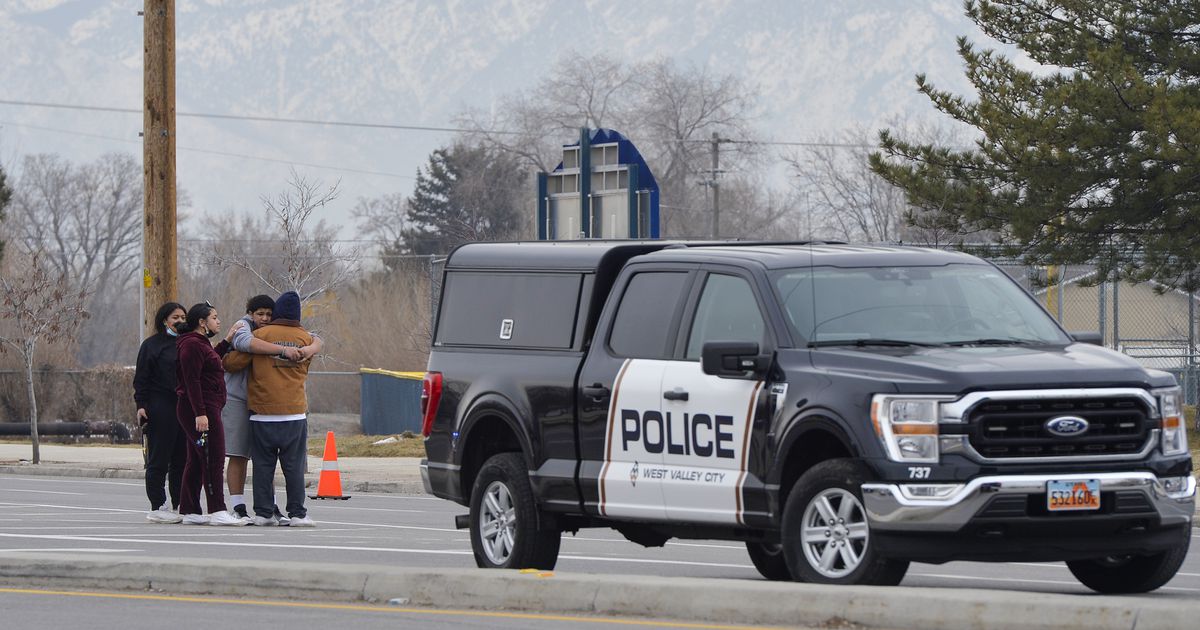 The shooting follows a scuffle between two groups of students, police said.

Two high school students were shot and killed and a third was injured Thursday in West Valley City, police said.

The shooting occurred on the sidewalk along 4100 South, between the northbound and southbound lanes of the Mountain View Corridor, according to West Valley City police. Three suspects were initially arrested and a fourth was taken into custody Thursday afternoon, police said.

The two students killed were 14 and 15 years old, police said. The injured student was 15 years old and was hospitalized in critical condition.

The shooting follows a scuffle between two groups of high school students, West Valley City police spokeswoman Roxanne Vainuku said at a press conference Thursday. The students involved knew each other, she added, and some of them went to Hunter High School.

Nearby, many people gathered on Thursday afternoon on the lawn of the Latter-day Saint seminary building on the edge of the high school campus, as well as on the sidewalk along 4100 South.

Behind the crime scene tape, they watched investigators examine the scene of the shooting. The children were playing on the nearby seminary lawn, chasing each other and playing a game of beating, undeterred by the strong wind and the dark scene.

Many onlookers embraced, some crying, some parading on their phones. A few stood wrapped in flannel blankets.

When approached by a Salt Lake Tribune reporter, a woman said she did not know any students at Hunter High. “We’re just here to support,” she said.

A man and a woman in separate groups both said they were there because their nephew was involved in the shooting. On the sidewalk, another woman cried as someone hugged her tightly, her moans filling the cold air.

The shooting took place along a main thoroughfare, bordered on either side by patches of weed-covered land. Two smaller crime scenes in nearby neighborhoods were also under investigation, Vainuku said.

The students at Hunter High School were released early in the day at 1 p.m. after taking shelter in place as a precaution. No extracurricular activities took place on Thursday. Hunter High is located at 4200 S. 5600 West, just east of where the fight broke out.

Three other schools – Hunter Junior High, Hillside Elementary and Whittier Elementary – also sheltered in place, but the protocols were lifted around noon.

In a letter to parents, Hunter High School principal Ryan Oaks said grief counselors were available to support the students. in high school and Hunter Junior High. The school’s crisis team will also be available on Friday, Oaks said.

The Hunter High School girls and boys varsity basketball teams were scheduled to play against Roy High School on Friday, but Roy High announced Thursday afternoon that all games against Hunter would be postponed until February 9 due to the shootout.

“Our thoughts and condolences are with the communities of West Valley & Hunter High School,” a statement read.

The children killed were not immediately identified on Thursday. More information on the circumstances of the brawl that led to the shooting was not disclosed. Police continue to investigate.