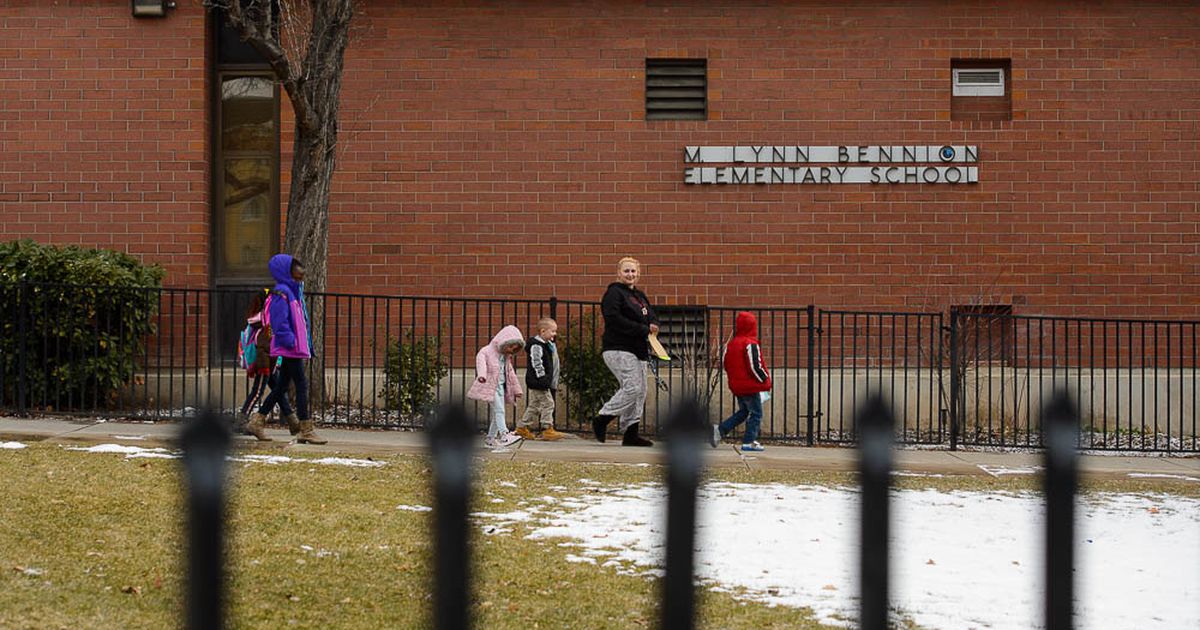 The proposed list is on the agenda for the Tuesday school board meeting.

(Trent Nelson | The Salt Lake Tribune) Mr. Lynn Bennion Elementary School in Salt Lake City is featured in 2019, when it was proposed for closure. School board members decided to keep the school open, but it is now on a proposed new study list of schools that might be considered for boundaries or closure.

In the face of declining enrollment that accelerated in the fall of 2020, Salt Lake City School Board members began the process of evaluating schools for potential boundary changes or closures.

Council members asked Superintendent Timothy Gadson to develop a study list earlier this month, after hearing that the expected continued decline in enrollment next year would support 76.5 fewer teaching positions, according to its school staffing formula. The council voted to cut 42 jobs instead, which district officials expect to be able to do through retirements and attrition, without layoffs.

Tuesday’s board meeting agenda includes a proposed study list in Gadson by Paul Schulte, Executive Director of District Auxiliary Services, Feb. 17. He suggests rating 14 elementary schools into five groups, based on building age, enrollment, usage, and proximity to other schools. Franklin Elementary School is the only school listed in multiple groups.

(The original list released by the district incorrectly included Wasatch Elementary twice and omitted Washington Elementary. This story has been updated to reflect and link to the corrected list.)

Schulte’s list will be presented for further questions and advice from council members on Tuesday, district spokesman Yándary Chatwin said.

Under district procedures for boundary changes and school closuresGadson was expected to gather information to present to the board by the end of February.

The next step outlined in the procedure is for the board to approve an official study list, and then from March through May, district staff would meet with representatives from each school. From May to June, an options committee – convened by Gadson – would develop a list of suggestions he considers viable, for presentation to the board in July.

School board members are not expected to comment on Schulte’s list at their Tuesday meeting, Chatwin said. Her suggestion to assess schools in clusters allows the board to consider the impact closing one school would have on others around it, she added.

Several of the schools on the proposed new list were evaluated in 2019 by a committee of district employees and parents. The group suggested the closure of Mr. Lynn Bennion Elementary, located near downtown at 429 S. 800 East.

Although the school board did not close Bennion at this time, his enrollment continued to decline, and he is on the proposed new list of studies.

Bennion and six other schools on the proposed new list were identified as “underutilized” in the 2019 review, meaning they can accommodate an additional 250 or more students. These schools are Ensign, Franklin, Nibley Park, Parkview, Riley, and Washington.

Bennion parents, teachers and students opposed the suggested closure at an emotional meeting in February 2019. They told the council that more than a quarter of Bennion students were homeless and that at least 30 children lived in the nearby women’s shelter for victims of domestic violence. a few blocks. Nearly 65% ​​of the students belonged to minorities.

As a Title I school, Bennion receives additional federal funding due to its proportion of low-income families—one of several such schools on the proposed new list.

• District neighborhood maps and the school board member from each constituency.

• The neighborhood procedures for reviewing boundary changes and school closures.

• The District’s Fall 2021 Enrollment Report. The numbers for each school are usually slightly lower than the numbers used in a more recent budget report to the blackboard.