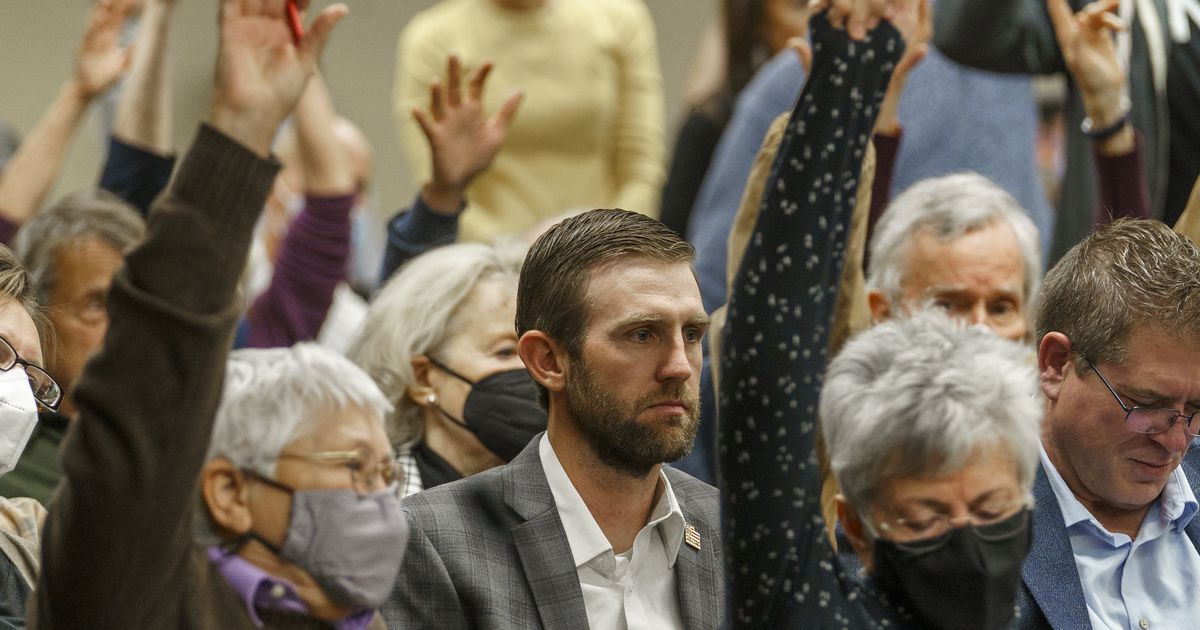 (Leah Hogsten | The Salt Lake Tribune) Carson Jorgensen, President of the Utah Republican Party, center, was surrounded by members of the public reacting in accordance with the public’s comments by raising their hands in solidarity against the new cards House Building Redistribution Panel, Room 30, November 8, 2021. The public was able to respond to the Utah Legislature’s Redistribution Committee’s only public hearing on Monday for the map proposals.

By Bev Terry | The public forum

I guess I’m not the only person in Salt Lake City today who feels like I’m sinking into a bottomless pit of despair. We all knew there was an undercurrent of madness lurking in our state, but it has now bubbled over the state pot.

If it was just madness, but, unfortunately, it is multiple: the indictment of an entire county for blatant racial discrimination, a group of young students and a teacher from an elementary school responsible for the suicide of ‘a ten year old black autistic child, the Utah legislature and governor turn their backs 100% on voters’ rights to a fair redistribution, three of our four lawmakers voting to block Utah from us money for new roads and infrastructure, and, as Geoge Pyle said so clearly, our own lawmakers are clearly setting us on the path to a national fascist government in the not-so-distant future.

I’m starting to believe that the Davis District isn’t alone in its stupidity and high opinion of itself, that our own government has made Utah an oligarchy-ruled state with very little actual electoral representation. , and that many Utah residents are wondering how we can escape the democratic ghetto of Salt Lake City before his clear and present death. And our majority religious institution in this not-so-fair state must ask itself when and where it all went so horribly wrong.

SLC Mayor Mendenhall on Transgender Day of Remembrance: “Our city is here for you”