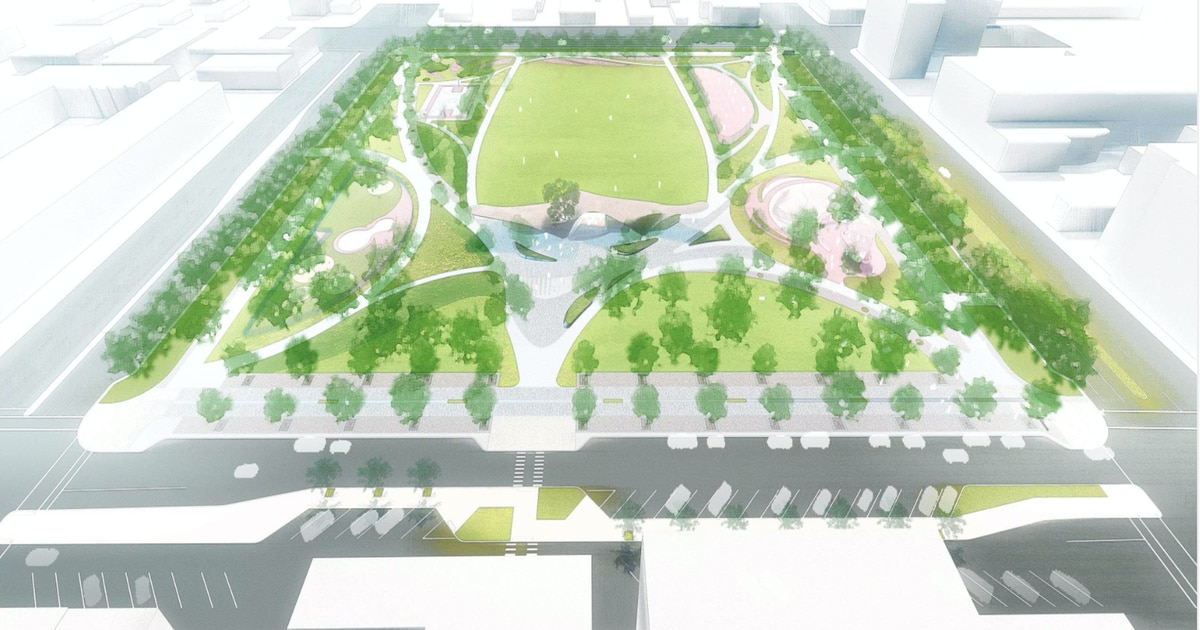 New plans call for the addition of trees, a clubhouse, and pickleball and basketball courts, while improving walkways and spaces for the popular downtown farmers’ market.

Salt Lake City is finalizing a new $20 million vision for the renovation of Pioneer Park as the downtown area surrounding it continues to grow in population.

The latest of many plans for this premier urban green space was presented to a positive but cautious city council this week. Concepts developed by city staff and the Salt Lake City-based design studio — and gleaned from public feedback — include new groves of trees, remodeled walkways, better lighting, a performance pavilion , additional sports facilities and other amenities intended to make the 10-acre park more inclusive and attractive.

There would also be a new drought-sensitive water misting feature, a playground, two new nearby transit stations and improved spaces for the park’s popular downtown farmers’ market, according to reports. newer concepts, which city officials say are still being worked on.

It’s the oldest park in Utah’s capital, with 175 years of history and a reputation in recent decades for being run down and prone to crime and vagrancy. After many discussions and several proposals for improvement put aside since 2003, these plans could become reality as early as 2023.

Assuming, that is, the city leaders choose to allocate the money.

“The project looks amazing,” said new council member Alejandro Puy, representing District 2 on the West Side. “Hopefully we can do that.”

The area has added more residents since 2010 than any other part of the city, and at least 1,016 more homes are now planned within a 15-minute walk of the block-sized park. Still, parks in general remain scarce in the urban core and rising land values ​​are making it harder for the city to create new green spaces, according to city manager Kristin Riker. Public Lands Department.

(Salt Lake City) A conceptual vision for improvements to Pioneer Park in downtown Salt Lake City. This east-facing view illustrates some of the plan’s visions for the downtown farmers’ market.

Residents of the park and across the city have consistently been supportive of its improvement in a series of surveys. The latest survey reveals that half of those questioned are extremely or somewhat dissatisfied with the park in its current state.

The latest plan, Riker said, focuses on improving the park’s natural features with more shade trees planted than would be removed and new expanses of natural vegetation. The upgrades would also aim to increase comfort in hopes of attracting more visitors, with new seating, toilets, a cafe and a ranger station.

Security would also be enhanced, Riker said, with more round-the-clock operations, staff, and designs that provide open sightlines across the park. And there would be new basketball and pickleball courts, lawn games and improvements to the dog park.

“This will truly be your downtown park,” Riker added, echoing the city’s theme as he solicited public input on his new designs.

History also looms large in the city. External consultants made Pioneer Park the subject of the very first “Cultural Landscape Report”, detailing its rich past as a guide for future upgrades. Plans for the park will get their second airing before the city Historic Monuments Commission early March.

The city has $3.4 million in park impact fees charged to developers, which could help propel Pioneer Park’s new vision, Riker said. The wave of downtown apartment construction could generate an additional $2.9 million in costs.

Meanwhile, discussions are underway at City Hall about putting a new bond in front of voters to help pay for a host of new open-air amenities, including Pioneer Park. Regardless of the city’s efforts, businesses supported Pioneer Park Coalition is seeking an additional $15 million for the park from the Utah Legislature.

(Salt Lake City) A conceptual vision for improvements to Pioneer Park in downtown Salt Lake City. This north-facing view depicts a proposed concert and event pavilion in the park.

Coalition lobbyist Scott Howell said Pioneer Park’s request has so far received a mixed reception from state budget lawmakers as they approach their March 4 adjournment. But the idea, Howell said, is that any money from state coffers would be matched by surrounding business owners.

“We’re not there yet,” Riker said of the $15 million request. “We are still waiting to see if the funds arrive.”

For its part, Salt Lake City is expected to incur new Pioneer Park spending as part of its annual program. capital improvement budget — and it is not done.

While receptive to the new vision, Puy and other council members said Tuesday that before allocating additional funds to Pioneer Park, they wanted to balance the budgetary needs of other city parks. Also vying on that priority list, they said, are Allen Park on the east side; a new regional park being considered to replace the now closed Glendale Water Park on the west side; and the possibility of creating new public green space on the city-owned Fleet Block on the eastern edge of the Granary district.