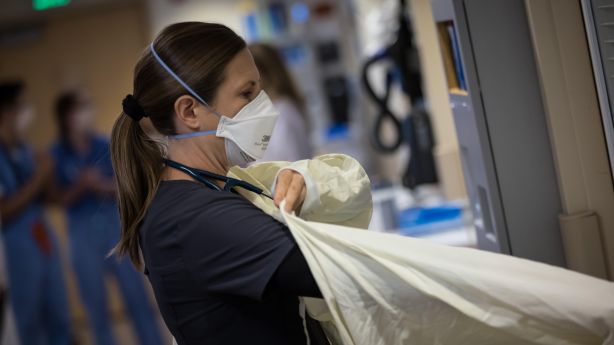 SALT LAKE CITY – Because Utah has not accepted a temporary federal emergency standard to protect healthcare workers from COVID-19 or provided a sufficient alternative, the Federal Safety and Health Administration at Labor said on Tuesday it was reconsidering and proposing to revoke the state’s current approval to run its own occupational safety and health program.

This decision would put the program back under the authority of the federal administration.

On June 21, the US Department of Labor released a temporary emergency standard to help protect healthcare workers from COVID-19. Utah is one of 22 states that have an approved state plan, state-run occupational safety and health program for workers in the private sector and state and local governments. This standard included preventative safety measures such as masks and social distancing as well as time off for workers who contracted COVID-19. It applies to healthcare workers in occupations at high risk of exposure to the coronavirus.

Due to OSHA’s declaration of the emergency standard, these states had to either adopt the standard or create an alternative that was at least as effective.

Of the 28 other states and territories that have state plans in place, only three have not adopted any part of the Temporary Emergency Standard or provided no alternatives – Utah, South Carolina and Arizona. The Federal Occupational Safety and Health Administration sent letters of courtesy to these states advising them of these failures.

“OSHA has worked in good faith to help the three state plans comply with their requirement to adopt an equivalent emergency temporary standard, but their continued refusal is a failure to keep their state plan commitments. to provide both a program for employee health and safety protection that meets the requirements of the OHS Act and is at least as effective as the federal program, â€said Jim Frederick, Assistant Under Secretary of Labor for OSHA.

Due to these failures, the administration said it was starting review proceedings and offered to revoke the state’s final approval.

“The more they refuse, the more they needlessly endanger thousands of workers,” said Frederick.

“We are very disappointed with the US Department of Labor’s claim that the Utah state plan is less effective than the federal one. In a July 21, 2021 letter to Secretary of Labor (Marty) Walsh, the governors of Utah, Wyoming and Nebraska have expressed concern that health care (temporary emergency standard) places an unfair burden on the health care sector and noted that our states do not have the regulatory power to require employers to pay sick leave to their employees, â€wrote Cox and Henderson.

“We reject the claim that the Utah state plan is less effective than the federal plan. While we have not refused to adopt the standards set by the Occupational Safety and Health Administration, we will again request the opportunity to discuss with the Biden administration our legitimate concerns regarding compliance with the proposed HTA for healthcare. Despite today’s communication, we are still happy to have the opportunity to further explain our position and our recommendations. â€

There are several stages of federal approval of a state plan, and the first is called â€œinitial approvalâ€. During this stage, the state and the Occupational Safety and Health Administration maintain shared authority that “may be exercised if OSHA deems it necessary and appropriate.” Utah also needs to prove that its state-run program is at least as effective in protecting workers and preventing workplace injuries, illnesses and fatalities as the federal government’s plans.

Once a state plan reaches final approval status, the federal government does not enforce the program and leaves it to the state. The Utah State Plan achieved final approval status in 1985, meaning the state was fully responsible for enforcement rather than the federal government, as long as it is overseen and approved by administration. Utah receives $ 1.6 million in grants from the Federal Occupational Safety and Health Administration.

The next step in the reconsideration process is to notify the state federal registry and then offer a 35-day comment period for interested parties to discuss the proposed revocation. Commentators with substantial objections could raise an audience. At the end of the process, the administration will make a decision regarding the revocation at that time.

The decision is motivated by the administration’s desire to maintain safety, because “OSHA’s job is to protect workers,” he added.